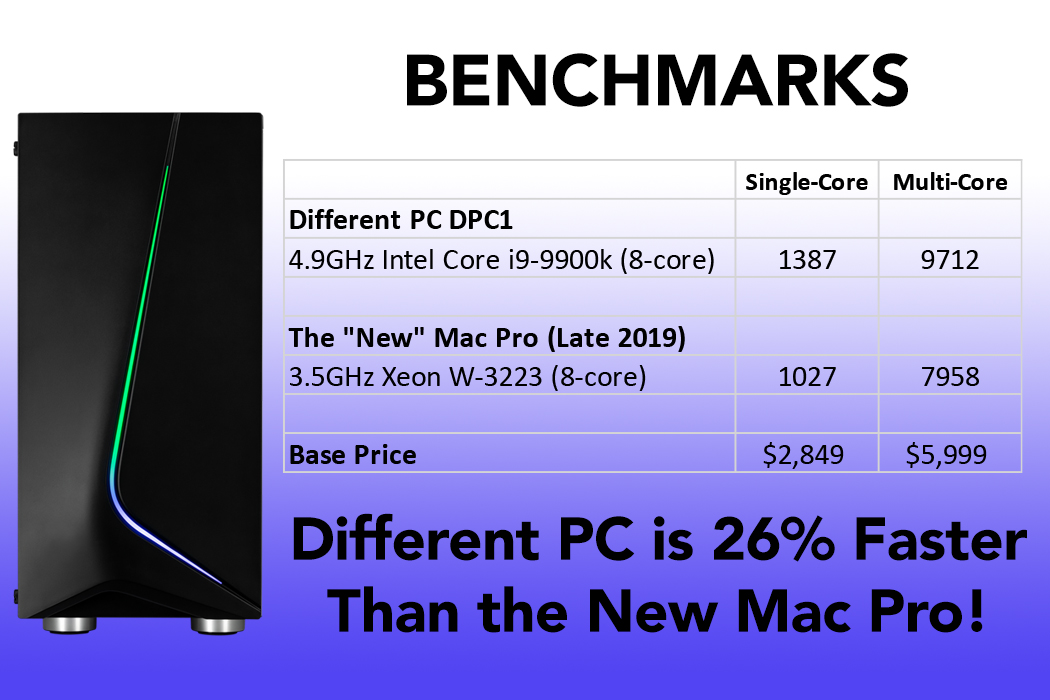 While it’s true that benchmarks aren’t everything, they do provide a baseline comparison of processing power in computers. In the case of audio workstations, this data can be useful in determining how fast one computer may process data compared with another.

For Different PC, that means comparing oranges to apples, or, more specifically, comparing the Different PC DPC1 with various Macintosh computers. We’ve got some exciting news to share in this regard, as the DPC1 is as much as 26% faster than the new late-2019 Mac Pro in its base 8-core configuration… and that configuration is the fastest version of the Mac Pro! So, is it really worth spending an extra $3,500 for a slower computer just to keep running the Mac OS?

And for those of you who still insist that your classic “cheese grater” Mac Pro is fast, note that the fastest version, the mid-2010 6-core 3.33GHz model, is easy to miss as you zip on by. The DPC1 is 54% faster in single-core benchmarks and 65% faster at multi-core tasks.

If we were still talking about the days of Windows 7, we’d splurge for the Mac Pro or the iMac, which is actually still faster than the base configuration. In fact, we wouldn’t have even launched this company if PCs were still living with Windows 7 and 8. Fortunately, Windows 10 is truly a modern operating system that is every bit as useful to creative professionals as the Mac OS. If you’ve been living with the Mac for the past 20 years, you won’t believe just how much better Windows has become.

GeekBench results for some of the Mac models provided by GeekBench.com. Other models were tested in our studios.

Welcome to Different PC. By musicians. For musicians. Taking a bite out of that other company. Go ahead. Give us your best cliche!

In all seriousness, we’re a new kind of PC company, focused on delivering powerful computers that are optimal for use in music production, recording, mixing, mastering, and performance. We got tired of the one-size-fits-all approach of some companies and the lack of computers packing the features that will enhance your experience on stage or in the studio.

Pardon our dust as we’re just getting started. But today, we’re ready to build and deliver your first Different PC, even if the nice, fully-automated online shopping cart system isn’t quite in place yet.